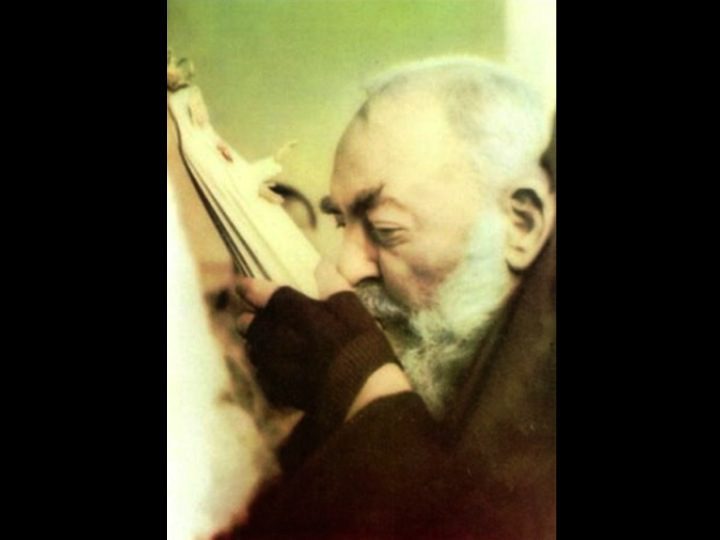 Padre Pio, a Franciscan priest who bore the wounds of Christ for 50 years and who died in 1968, is said to have a connection to the Apparitions of Our Lady in Medjugorje.
How can this be said since Padre Pio died 13 years before the reported apparitions even began in 1981?
The claim is based on the following testimonies:
Years before the apparitions in Medjugorje began, a group of pilgrims from the diocese of Mostar went to see Padre Pio. They reported that he told them: “The Blessed Virgin Mary will soon be visiting your homeland.” from the book: A Spark from Heaven by BBC journalist Mary Craig (…Medjugorje is a village in the diocese of Mostar).
2. Additionally, (this time, years after Padre Pio’s death), a priest named Father Don Pablo Martin said that Padre Pio inspired him to pick out a certain statue of Mary while he was visiting Medjugorje. He said that Padre Pio revealed to him that this statue would become an instrument of  “the most beautiful event of this life”. In September 1994, Father Martin gave Fabio Gregori, a devout Catholic, this same small statue of the Virgin to protect his home and family in the small Italian village of Civitavecchia. This statue of the Queen of Peace would go on to weep tears of blood 14 times from February 2, 1995 to March 15, 1995.
The last time the little statue of Mary wept was while she was being held in the hands of Bishop of Civitavecchia Bishop Girolamo Grillo, who had been, (up until that time), the greatest skeptic of the reported weepings.
Here’s a summary of the events of the Madonna of Civitavecchia:

“On the afternoon of Thursday, February 2, 1995, Gregori was hurrying to mass when his six-year-old daughter Jessica’s shrieks pierced the air. “Papa, Papa, come and look. The Madonnina is crying. There’s blood everywhere!” Rushing to join her at the little stone shrine he had built in the garden, he saw, he says, red liquid well up in the statuette’s eyes and trickle down her cheeks and gown.” 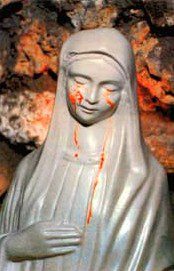 When the statue was taken in for examination on February 24, 1995, they found after repeated analysis and DNA testings confirmed the blood was of human origin. …and that it was male blood,
“while a series of x-rays and CAT scans of the
statue itself confirmed that [the statue] was solid, with no sign of having been
rigged…”
After La Madonnina [the little Madonna] wept again in the bishop’s own hands, it was sent to undergo “further
x-rays and scans together with DNA analysis of the new bloodstains, which were reportedly identical to the first. This finally led to [the Bishop, Monsignor
Grillo, who was initially very skeptical,] to state publicly that because they were of male blood, the
tears could only be those of Christ. ”https://www.theguardian.com/theguardian/2000/dec/09/weekend7.weekend1 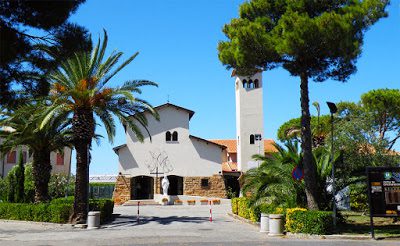 Since June 17, 1995, the statue has been on display in the parish of St. Agostino, a small village outside of Rome. Thousands of pilgrims have come to venerate “The Madonna of Civitavecchia” and reports of healings have taken place:

March 1996 – Healings by the Madonna of Civitavecchia. A Theological Commission Researches the Case
According to Bishop Girolamo Grillo of Civitavecchia/Turin, Italy, more than 20 extraordinary events have taken place since a statue of Mary is said to have shed bloody tears last year. Healings of persons afflicted with cancer and drug addiction are among them. Bishop Grillo was interviewed by the daily news, “La Stampa,” on the anniversary of the phenomenon. The happenings are attributed to the intercession of the Mother of God.
Bishop Grillo reported that among the many votive offerings where the statue stands, there are wedding rings as signs of saved marriages and little shoes as signs of children who were cured. The statue originates from Medjugorje in Herzegowina, Jugoslavia. It is said to have wept bloody tears in the garden of an electrician in Pantano near Civitavecchia. The reports have caused international interest. A theological commission is currently researching the case. The last time the statue is said to have wept was last year in the hands of the bishop.

March 20, 2001 – Court Finds No Deceit With Weeping Statue “Virgin of Civitavecchia” Continues to Draw Visitors
As reported in [Zenit.org] – Rome – A judge found no evidence of deceit or trickery involved with a statue of the Blessed Virgin that witnesses, including a bishop, say weeps blood. Fabio Gregori, a worker in Civitavecchia, a city near Rome, had declared publicly that the statue wept blood in February 1995. The statue had been brought to his house by Spanish priest Pablo Martin from Medjugorje.
The case received wide media coverage and brought thousands of visitors to the garden of Gregori’s home, where the statue was first placed, and later to the nearby church where it was later taken. A consumer-protection group, Codacons, along with another group, Anti-Plagiarism Telephone, denounced Gregori before Judge Carmine Castaldo of Civitavecchia. Gregori, an electrician, was accused of association to commit offense, fraud, and abuse of people’s credulity. The judge on Monday ruled that there was no trickery involved in the case.
Bishop Girolamo Grillo of Civitavecchia said: “Six years ago, I got angry because I felt the magistrate was interfering unduly in ecclesiastical questions. However, they haven’t found anything, and they have had to close the case. It is further confirmation, offered by third parties who are above suspicion, that following the phenomenon of the tears, there was no deceit. Today I say: Let’s hope that the world will at least believe the court.”
Bishop Grillo admitted he was initially skeptical when he first heard Gregori’s story. “One week after the announcement of the first weeping, I told the parish priest to get a hammer and destroy the little statue,” the bishop said. “He hid it, entrusting it to Mr. Gregori’s brother. Then I took custody of it to clarify the case, and the statue wept while I held it in my hands.”
Bishop Grillo reports that an average of 3,500 pilgrims a week visit the church that houses the statue. Five Masses are celebrated in the church on Saturdays, and seven on Sundays. The accused was also pleased. “I am happy that the case has been closed, but in conscience I must say that I was always absolutely at peace,” Fabio Gregori stressed. “I was prepared to face an eventual sentence so long as I could defend the truth to the end.”
The electrician remembers the many searches to which his home was subjected. However, “I have never felt this judicial matter as a weight,” he said. “My life as a husband and father of a family has not changed; my Christian being has changed profoundly.” The Congregation for the Doctrine of the Faith is analyzing the case of the weeping statue. At Bishop Grillo’s request, the Vatican congregation is allowing faithful to visit the statue.
http://www.visionsofjesuschrist.com/weeping63.htm

Additionally, it was reported that the statue was venerated by Pope John Paul II:

“The Bishop of Civitavecchia Gerolmo Grillo reported that in 1995, the
same year that the statue from Medjugorje began crying tears of blood,
Pope John Paul II asked to have the statue brought to the Vatican. When
the statue was brought to the Holy See, John Paul II venerated the
Madonna with great reverence, praying before the statue and, after his
humble prayer, placing a crown on the head of the Virgin – a crown which
the pope himself brought for the occasion.”

A priest friend recently shared that he believes St. Francis of Assisi holds an important place in understanding Medjugorje. He sees how dearly the Franciscans – the parish priests of Medjugorje – minister and uphold this place of daily reported apparitions with such great love and devotion, and believes that one day we will understand how deeply the St. Francis and the Franciscans are connected with Medjugorje.
These intertwinings of St. Padre Pio and Medjugorje add further information for us to ponder.
St. Francis of Assisi and St. Padre Pio, you who both bore the wounds of Christ and changed the world with your love, help us to ponder and live the reported messages Our Lady is giving us from heaven – so that we, too, may live lives fully devoted to Jesus and His Blessed Mother. We ask this is Jesus’ Name. Amen.

1 thought on “The Connection Between St. Padre Pio and Medjugorje”