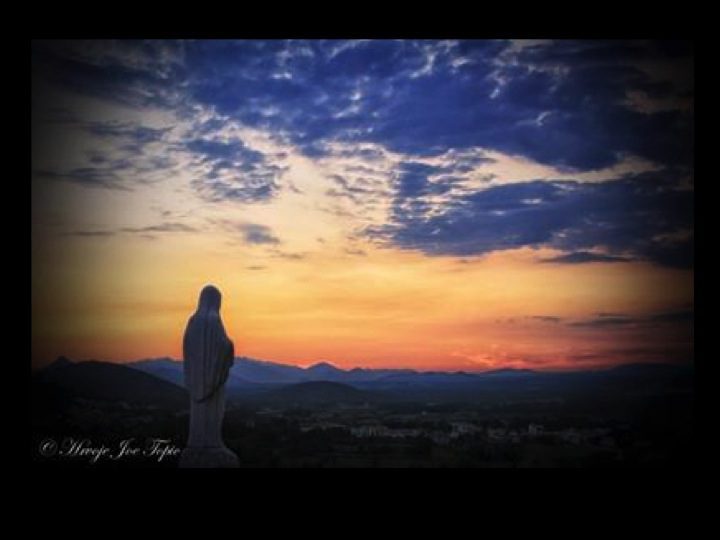 This
is a continuation to:
“What
are We to Believe About Medjugorje? Here are the Facts”.:
https://priestlyconsecration.com/2019/03/what-are-we-to-believe-about-medjugorje.html
It is meant to be a quick access guide
to the latest facts regarding Medjugorje.
May it be a gift to you and to all
those you share it with:
Fact:  Medjugorje is a village where tens of
millions have visited since 1981. It has been reported consistently and
undeniably, for over 38 years, that Mary, the Mother of Jesus has been coming
to earth every day to call people to conversion and prayer. The reported apparitions
are ongoing.
In the reported
messages, Mary calls herself the “Queen of Peace” and asks for:
Peace, for her
children to convert and have strong faith and to pray with the heart through
centering our lives on the Eucharist (adoring and going to Mass daily if
possible), reading Scripture and praying the rosary daily (with our families),
fasting twice a week and confessing once a month. Up to 50 million people have
made pilgrimages there.
Fact: St. John Paul II had a great love for Medjugorje.
“A priest testified the pope had been interested in
Medjugorje from the very beginning, because right before our apparitions
started, he had been praying for Our Lady to appear again on Earth.
“I
cannot do it all alone, Mother,” he prayed.
“In Yugoslavia, Czechoslovakia, Poland and so many other communist
countries, people cannot freely practice their faith. I need your help, dear
Mother.”
According to this priest, when the pope heard
that Our Lady had appeared in a tiny village in a communist country, he
immediately thought Medjugorje had to be an answer to his prayers.”
The above story, the following quotes (and many more)
are referenced here: “Medjugorje: In St. John Paul II’s Own Words”: https://priestlyconsecration.com/2019/10/medjugorje-in-st-john-paul-iis-own-words.html
·
Regarding the liberation of Poland from Communism:
“No,
this is not my merit. This is the work of the Blessed Virgin Mary, as She had
predicted in Fatima and in Medjugorje.”
·
“Our
Lady of Medjugorje will save America!”
·
“Today’s
world has lost its sense of the supernatural, but many are searching for it –
and find it in Medjugorje, through prayer, penance, and fasting.”
·
“Medjugorje
is a continuation, an extension of Fatima. Our Lady is appearing in communist
countries primarily because of problems that originate in Russia.”
·
“Medjugorje
is the hope for the entire world.”
·
“Medjugorje,
Medjugorje, it’s the spiritual heart of the world.”
·
“Medjugorje?
Medjugorje? Medjugorje? Only good things are happening at Medjugorje. People
are praying there. People are going to Confession. People are adoring the
Eucharist, and people are turning to God. And, only good things seem to be
happening at Medjugorje.”
·      “If I were not pope I would
already be in Medjugorje confessing.”
·      “Approve all that is related
to Medjugorje.”
·      “…I thank Mrs.
Zofia for everything concerning
Medjugorje. I , too, go there every day as a pilgrim in my prayers: I unite in
my prayers with all those who pray there or receive a calling for prayer from
there. Today we have understood this call better. I rejoice that our time is not lacking people of prayer and apostles…”
·      “Medjugorje
is better understood these days. This
kind of “urging” of our Mother is better understood today when we see with our
very eyes the enormousness of the danger. At the same time, the response in the way of a special
prayer – and that coming from people all around the world – fills us with hope
that here, too, the good will prevail. Peace is possible…”
Fact: Cardinals and
Bishops throughout the world testify to the fruits of Medjugorje. Here are just
a few:
In 1983, only two years after the apparitions began, Cardinal Kuharic,
then-Primate of Croatia, reflected:
“How can I doubt that
Medjugorje is God’s doing?
…Do you know that
half a million young people have surrendered to Christ? The Lord is stirring
this country! They need fifty to sixty priests every weekend just to hear
confessions and to counsel these young people! And it’s all because this apparition!”
Cardinal Siri of Genoa, 1989 [Gebet, #4, 1990]:
“I have noticed
that the people who come from Medjugorje become apostles. They renew the
parishes. They form groups in which they get together, prayer groups. They pray
before the Blessed Sacrament. They hold lectures, lead discussions and bring
others to Medjugorje. And these circles – these prayer groups – spread out more
and more. They renew the Church!”

Bishop Domenico Pecile, Vicar of St John Lateran
Basilica, the Pope’s Cathedral in Rome:
“In Medjugorje
Our Lady is coming in a very powerful way… It is impossible not to see here
the Lord our God. Impossible!…
In all our churches throughout the world, it should be as it is here in
Medjugorje!”
Fact:  The New evangelization is taking place in
Medjugorje
The Papal Appointed
Apostolic Visitor to Medjugorje, Archbishop Henryk Hoser:
·       “There
is no doubt …We live here the new evangelization, as Marian devotion developing
here is very dynamic. This is the time and the place of conversion. Here, one
discovers God’s existence in his own life and God’s desire to be present in the
human heart in the society that lives as if God does not exist.”
·      “…fruits of profound conversion… the
most mature and the most important fruit is the phenomenon of conversion through
confessions, peace and reconciliation.”
·      Regarding Rwanda, as he was also appointed the
Apostolic Visitor for Rwanda: “There are many similar elements … Our Lady in
Kibeho wanted to warn the people of the future events that proved to be the
genocide. This was the mission of the Queen of Peace, and it is a certain
continuation of the apparitions in Fatima. … The apparitions in Medjugorje
began also in 1981, a few months before Kibeho and it also proved to have the
importance for the future war in the former Yugoslavia. Devotion to the Queen of
Peace is developing here in Medjugorje and we find many similarities with the
apparitions in Fatima. The invocation “The Queen of Peace”, was introduced to
the Loreto Litanies by Pope Benedict XV, in 1917, in the year of the
apparitions in Fatima, during the World War I and the Soviet Revolution. We
can see God as ever-present in the human history and He sends us Our Lady to be
close to us in every time.” http://www.medjugorje.hr/en/news/information/mons.-henryk-hoser-on-medugorje-this-is-the-time-and-the-place-of-conversion.-this-is-where-we-live-the-new-evangelisation,10198.html
Archbishop Rino
Fisichella, the President of the Pontifical Council for the Promotion of the
New Evangelization celebrated the last Mass of the Youth Festival:
·      “one branch of the New Evangelization
has pastoral responsibility for the
shrines in the world. Even though Medjugorje has still not been officially
recognized as the shrine, this place is
the destination for millions of pilgrims each year…
·      One cannot notice that pilgrims walk all over this place with
rosary beads in their hands and they pray, as they walk in the roads, as they
climb the hills, everywhere…I believe this is one really positive sign…
·      I was also impressed by the great number of youth here. Yes, this
was the 30th Youth Festival, however it felt for me as I was again on the World Youth Day. I think this
is one really important event that
defines Medjugorje and involves so many people. Not only in accommodating
all these young pilgrims, but also in formation
they receive. The prayer programme is enriched with catechesis and dialogue,
something of great importance in New Evangelization in these times.
·      Prayer
is at the first place, in its peak in the Holy Eucharist and the Adoration of
the Blessed Sacrament.
I need to emphasize that the event that took place on the last evening is
really significant. After two hours of
the intensive Eucharistic celebration, we could witness the profound silence of
so many youth and 800 priests who remained in the Eucharistic Adoration.
·      Those are the elements of the New Evangelization”.

http://www.medjugorje.hr/en/news/archbishop-rino-fisichella-on-the-youth-festival-i-was-impressed-by-the-number-of-the-young-people-having-rosary-beads-in-their-hands,10490.html
Fact: For 30 years,
millions of young people from nearly every country on earth have come to the Annual
Youth Festival that is hosted in Medjugorje.
REgarding
the 3oth Annual Youth Fest August 1-5, 2109
The
Catholic New Service reported, in an article entitled: “Vatican confirms
Medjugorje approval by joining youth festival”:
“Radio
Medjugorje reported Aug. 5 that parts of the festival had been watched via the internet by more than 2.8
million people worldwide.
Speaking
at an Aug. 2 press conference, Hoser said the
pope had “opened a great door to enter Medjugorje” with his May decree, adding
that he was “personally and intimately
convinced” the Marian center offered
“a model for new evangelization.”
He
said Medjugorje should be seen as “a
living, dynamic reality,” with over 700 vocations so far recorded there, adding
that the center’s importance was summed
up “by the people coming here, praying here, being transformed here and
returning to their countries with the Gospel spirit they breathed here.”
“The Holy See’s position has
crystallized clearly and has two aspects: the pastoral aspect, which is fully
accepted, and the doctrinal aspect, meaning study of the apparitions,” he told KAI, Poland’s Catholic
information agency.
“The fact apparitions are still
continuing is the main obstacle to a final ruling, since it’s hard to decide on
something which hasn’t finished. For now, the question of
recognizing the authenticity of the apparitions remains in the hands of the
Secretariat of State.”  https://cruxnow.com/church-in-europe/2019/08/06/vatican-confirms-medjugorje-approval-by-joining-youth-festival/
Apostolic Nuncio to Bosnia
and Herzegovina Archbishop Luigi Pezzuto:
·
“We are already
considering how to involve the bishops within the universal Church, not just by
coming here, but also to be engaged as much as their lay people and priests, in
organizing the youth in their dioceses for coming to the Youth Festival in
Medjugorje, and for all the other pilgrimages, too. We must get to the
point that the bishops are the ones who will organize the pilgrimages of their
faithful to Medjugorje and that there is a true Marian devotion, which should
be Christocentric.”
The Papal Appointed
Apostolic Visitor to Medjugorje, Archbishop Henryk Hoser:
·
“During the Youth Festival, there
were 14 shepherds, the Church Officials, cardinals, archbishops and bishops
present here and among them three representatives of the Holy See.
·
“The first reaction and the first thing I have to say
is that bishops, archbishops and cardinals from Rome and other places… discovered
an unknown reality that was often hidden. They were very moved,
sensitized by the atmosphere that was at the Youth Festival, by the
enthusiasm and joy shown by the young people. They were fascinated
by the ability youth here presented in remaining in the complete silence,
and these were young people who constantly lived in a noise, with earphones in
their ears. And what touched these cardinals and bishops was how they
reacted to catechesis. You had the impression that they were
sitting in silence, getting bored because there was absolute silence, and then when
they finished they explode in applause, which meant they followed and listened
what was said.
·
Everyone noted …specific
realities of Medjugorje.
·
The first one we
already talked about is confessions. There were 700 priests engaged in
confessions. During the day they confessed for hours.
·
Another very
powerful aspect is Adoration – Adoration of the Blessed Sacrament and the
Veneration of the Cross – the liturgical practices that have almost disappeared
along with confession in the rest of the world.
·
And the third
aspect they have noticed is the prayer of the Rosary. This is the place
where the Rosary is said on daily basis. The Rosary, in many
countries, is considered to be a prayer of elderly women and here we see
young people with rosaries in their hands…” http://www.medjugorje.hr/en/news/nuncio-pezzuto-bishops-need-to-be-engaged-in-organising-pilgrimages-to-medjugorje,10472.html

“The
Deep Connections between Saint John Paul II, Medjugorje and Fatima – An
Interview with Bishop Hnilica”