If an apparition of Mary was needed for St. James, how can we say apparitions aren’t really necessary for us?
…and if she is truly coming to us, how can we say we don’t need her?
How can we ignore her presence and even disparage this astounding gift from heaven?

Every Feast of St. James the Greater, on July 25th, I can’t help but think of Medjugorje, a place known for the millions of pilgrims who journey there every year because it’s extraordinary reports of decades-long daily Apparitions of Mary, which are accompanied by signs and wonders and countless conversions.

I think of Medjugorje when contemplating St. James because the famous two spire parish church in Medjugorje is named after him. Interestingly – and providentially – the Church was named after St. James, who is the patron saint of pilgrims, before the great multitude of pilgrims were even dreamt of.


I also connect Medjugorje to St. James, because he was the first person in the history of the Church to receive an apparition of Our Lady!


The first Marian apparition of the Church is amazing (just like every one since)!
This is what took place:

James, the brother of St. John and one of the sons of Zebedee, whom Scripture tells us left his father and his livelihood immediately in answer to Jesus’ call was attempting to evangelize Spain.
Just seven years after Jesus’ death and resurrection – when the apostles had scattered throughout the world to spread the Good News as Jesus commissioned them to do – James was trying with great futility to bring Christ to the people of Spain.
However, all of his attempts seemed to be an utter failure and he became so discouraged that he had decided to leave Spain and never return. As he was leaving, he prayed for help, and in answer to his prayers, Mary appeared to him near the banks of the River Ebro, near the city now known as Zaragoza on January 2, 40 A.D.


Mary appeared seated on a throne — on clouds and accompanied by angels — even while she was still alive and living in Palestine. 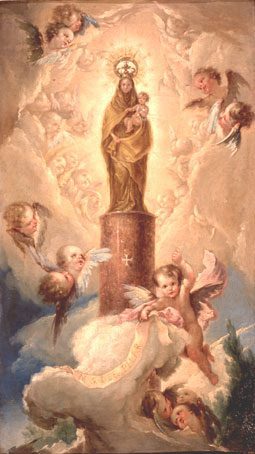 (Move over St. Pio… the Mother of God was the first saint to bi-locate in history!!!)

Mary came to comfort and encourage James and his companions. She told him she had come to help him and asked that a chapel be built in her honor and presented him with a statue of herself with the infant Jesus, who is holding a dove, on a pillar of jasper, (the jasper is unlike any found in the world). She promised that an angel would always remain to guard the statue, saying: 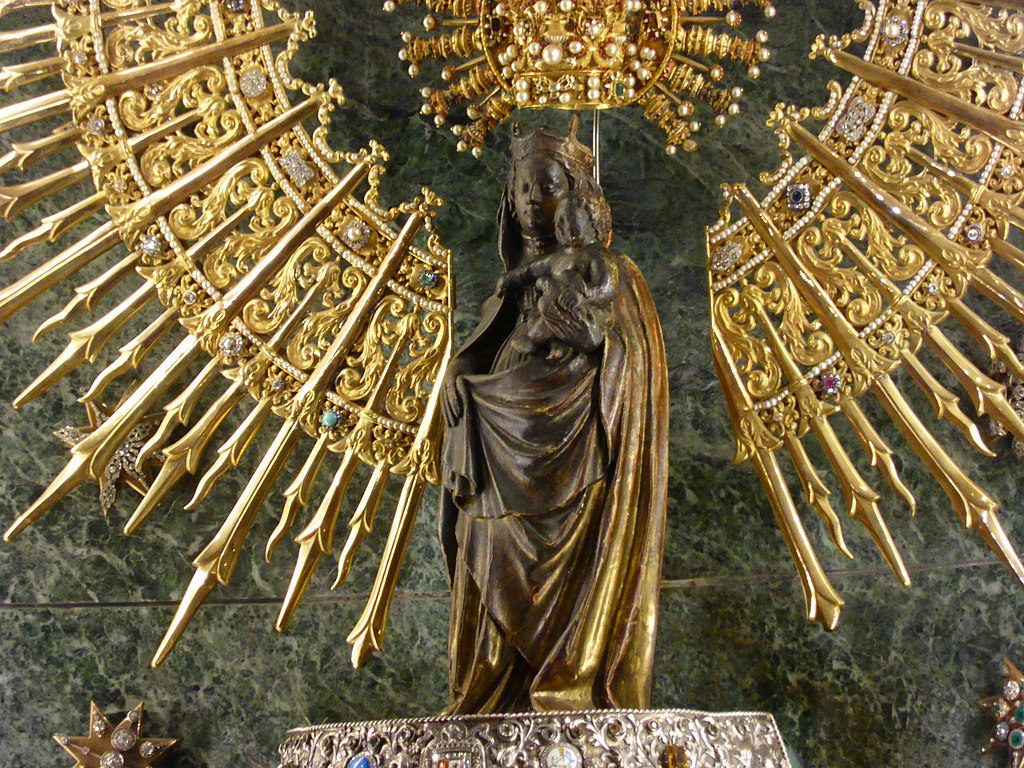 Every year 400,000 faithful come to celebrate the commemoration of this miracle on October 12th and honor Nuestra Senora del Pilar, (Our Lady of the Pillar), the patroness of Spain.

“The
image of Our Lady of the Pillar is a wooden statue decorated with gold;
it is about fifteen inches high. The crown adorning the head of the
statue is very intricate. It was made in forty-four days by thirty-three
workmen; in it there are 2,836 diamonds cut triangularly, 2725 roses,
145 pearls, 74 emeralds, 62 rubies and 46 sapphires. The crown of the
Infant is identical with that of the Virgin, except in size.” (https://www.roman-catholic-saints.com/our-lady-of-the-pillar.html)

Miracles abound regarding this Shrine!

“The most prominent miracle occurred in
the 17th century. A beggar named Miguel Pellicer from the town of
Calanda could not work due to having an amputated leg. He was constantly
praying at the shrine for the Blessed Mother’s help and his leg was
restored.” (https://aleteia.org/2017/10/12/did-you-know-the-1st-apparition-of-the-blessed-mother-was-an-act-of-bilocation/) 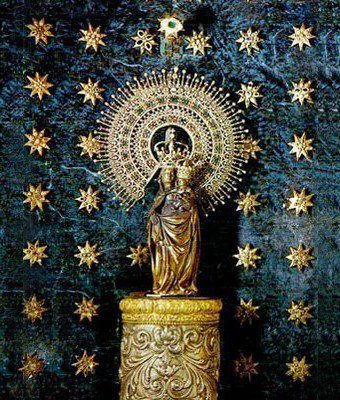 It is reported that in all of its 2000 year history, the statue has never needed dusting.
(Perhaps this is a sign of the impeccability of Our Lady’s heavenly housekeeping – and attention to detail?!)

The statue also shows no sign of aging, and has survived wars with the Romans, the Goths and the Moors. Evidence of its latest miraculous survival can be seen by looking up while inside the magnificent shrine (the church has been built again and again throughout the centuries until today it is known as the Basilica of Our Lady of the Pillar) when you look up you will see three bombs that were dropped on the Church that failed to detonate during the Spanish Civil War (1936-39). 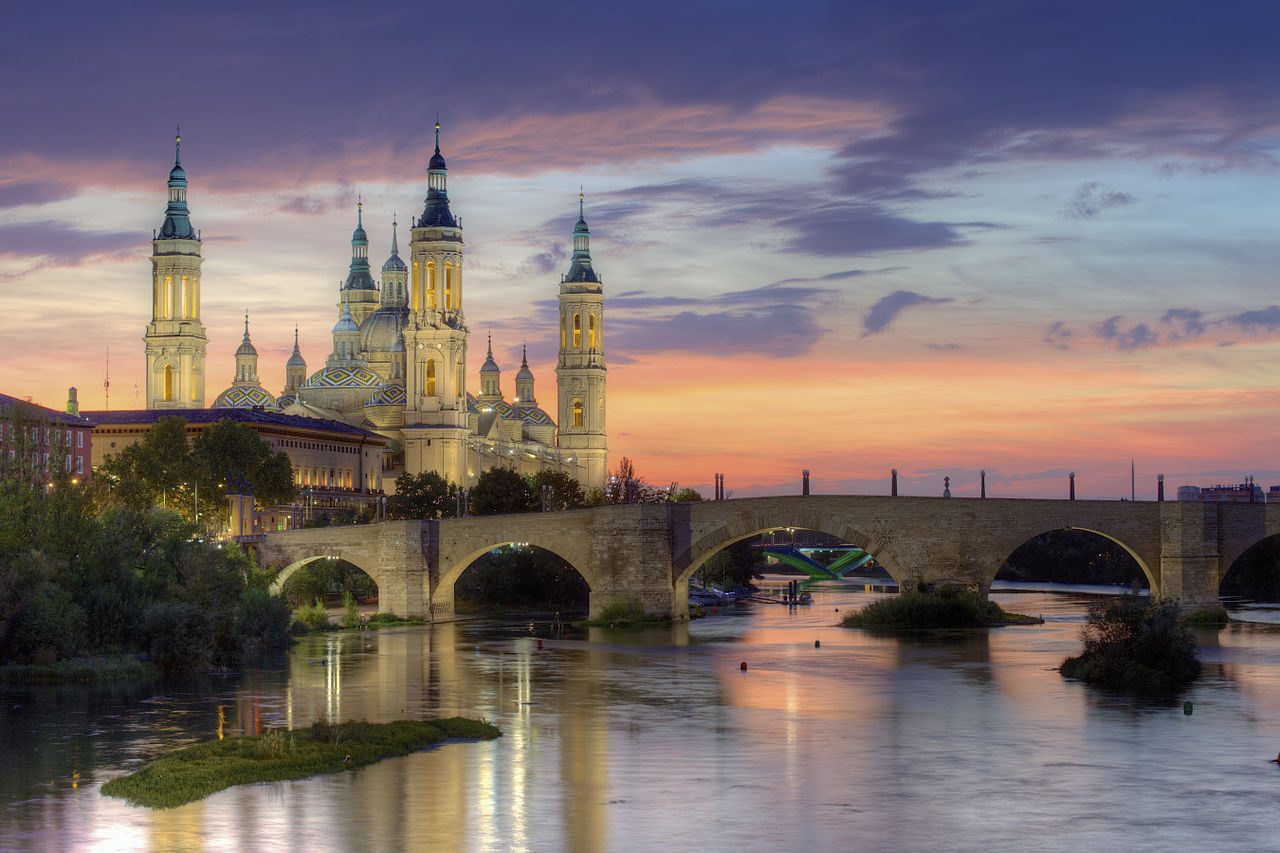 Considering this first apparition of Mary makes me wonder:
if St. James
— who was so brave that he gave his life for Christ and was the first apostle to be martyred in 44 AD by King Herod
— who was formed by him to be an apostle for three years by Jesus himself
— who was one of the three closest to Jesus, so thus was privileged to witness
the raising of Jairus’ daughter,
the Transfiguration and
Jesus’ Agony in the Garden…

If he, even as an apostle and one of the greatest saints in the history of the Church, got so discouraged that he wanted to quit his mission
— so much so that he needed a divine intervention …
how much more must God understand our own discouragement and failures — our own wanting to quit — and even the need we have within us for signs from heaven?


God’s understanding of our human need and frailty may, in part, explain why God is sending Mary to us so often and in so many places — especially in this last century — a time given over to Satan according to a vision seen by Pope St. Leo XIII.


For God would never allow this terrible time of evil unless he could bring an even greater good out of it … for He is never outdone by evil.


Thus, no matter how horrendous the darkness is in our times…
(which boasts of more Christians being martyred than all the centuries before combined, and over 1.5 billion unborn babies being slaughtered by abortion throughout the world since 1980 at this writing, and horrific abuse and scandals both within and without of the Church)
this time must also be considered a time of boundless Mercy,
for Mary being sent to us is a sign that
GOD IS ALWAYS WITH US
and is so intimately involved in our lives and struggles that He longs to show his love for us daily

For “where sin abounds, grace abounds all the more.” Romans 5:20.

Of course, the greatest way we experience His Presence is in the Most Blessed Sacrament, where He gives HIMSELF to us to feed and nourish us through the Mass and the Sacraments.

Yet, He also gives us His Mother to be our own;
A mother who, in turn, intercedes for us and is constantly attentive to our needs — knowing what we need even before we do ourselves — just as she did for St. James so many years ago.


So, instead of the certain defeat that awaited James in Spain,
through Our Mother’s intercession and help,
James not only had great success during his lifetime in evangelizing Spain;
but, even now, hundreds of thousands of pilgrims walk for weeks or months to make the Way of St. James each year (300,000 walked the El Camino de Santiago in 2017). (Erimatica. “Estadística de peregrinos del Camino de Santiago a 2018”.) 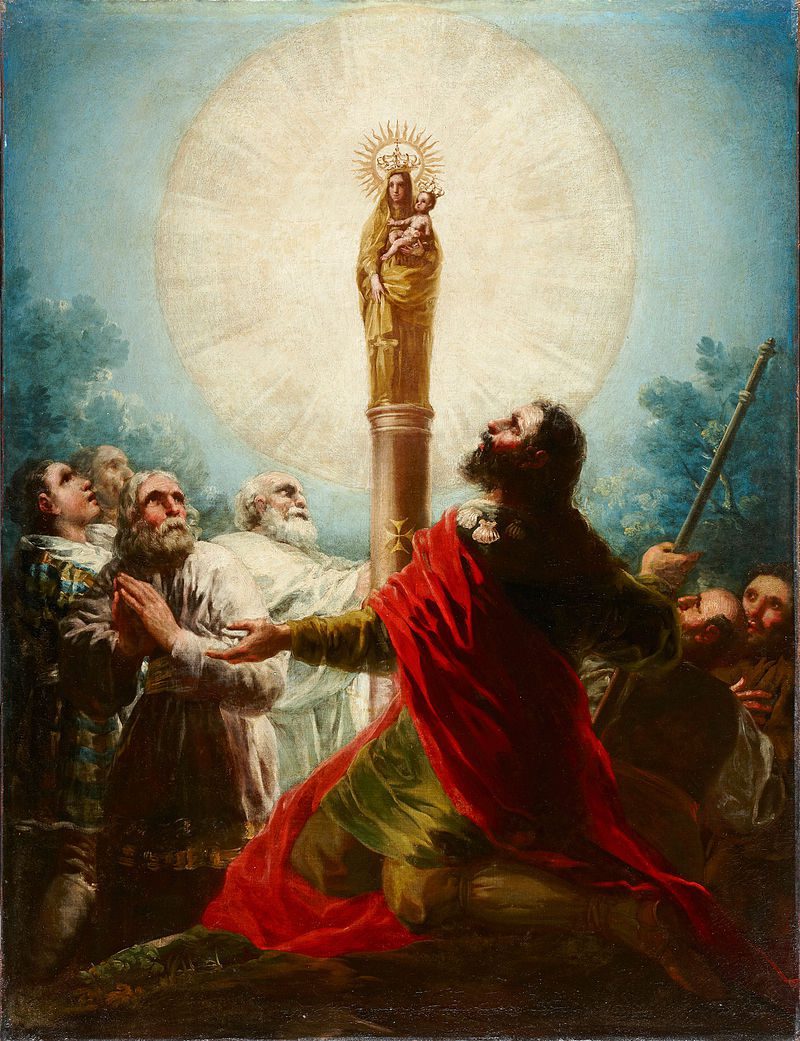 If so much success and so many miracles can occur from one brief visit of Our Lady nearly 2000 years ago, what can happen through Our Mother reportedly coming to us EVERY DAY in Medjugorje for nearly four decades???

What if Medjugorje is truly a gift from God?
… A Divine intervention in answer to our prayers?
….A living example of Our Mother’s constant care for us?
WHAT IF MARY IS COMING TO HELP US, BECAUSE WE WOULD CERTAINLY FACE DESTRUCTION WITHOUT HER?

If St. James needed an apparition of Mary, how can we say it’s not necessary for us?
And if she is truly coming to us, how can we ignore and disparage this astounding gift from heaven?

May we pray, together with St. James, that Our Mother’s coming to us be received with the love, attention and devotion that it deserves.
And may we fulfill the reason for her coming – for she has come to save us!!!
May we respond, so that her coming will not have been in vain for us, in Jesus’ Name, Amen.

Three days before the Feast of the Patron Saint of Pilgrims, the Feast of St. James, in 2018, Archbishop Hoser officiated at his first Mass since being named Pope Francis’ Apostolic Visitor to Medjugorje.
You can find out more about Medjugorje by clicking here and here and here.