Skip to content
I felt called to share this true event.
May Jesus have mercy on us …and may we be moved by the tears of our Mother!
Love and prayers to you all in these last days of Advent,
Janet Moore

Dan Lynch
December 19, 2018
It was Christmas Eve in the cold of snowy Colchester, Vermont, in a church a few years ago. The Missionary Image of Our Lady of Guadalupe was prominently displayed before the congregation during Mass. 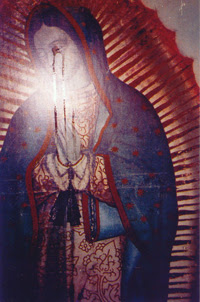 The priest immediately turned back to face the congregation and was inspired to say,“Our Lady of Guadalupe is crying on the eve of her son’s birthday for all of her children who have no birthday because they were aborted.”

The congregation got the message and some of them shed their own tears. A skeptical eyewitness later said that he thought this was all a fake. So, he went up to the image after Mass and looked for tubes of water behind the image or any other tricks that might have caused it to weep. He found nothing, felt the tears and said they were not tears of water, but tears of oil.

St. John Paul II once spoke about Mary’s tears. On November 6, 1994, at the dedication of the Shrine of Our Lady of Tears in Syracuse, Sicily, he said that her tears are signs testifying to her presence, her sorrow and her hope. He said,

Mary’s tears are seen in her apparitions, with which, from time to time, she accompanies the Church during her journey on the highways of the world.
Our Lady’s tears belong to the order of signs: they testify to the presence of the mother in the Church and in the world. A mother weeps when she sees her children threatened by evil, be it spiritual or physical.

These are the tears of sorrow for all those who refuse the love of God, for those families that are broken or in difficulty, for the young people seduced by a consumerist civilization and so often disoriented, for the violence that still spills so much blood and for the misunderstandings and hate which dig deep trenches between individuals and peoples.

They are tears of hope, which melt the hardness of hearts and open them to meeting Christ the Redeemer, source of light and peace for individuals, for families, for the whole of society.

O Lady of Tears, look with motherly goodness on the sorrow of the world! Dry the tears of the suffering, of the forgotten, of the desperate and of the victims of every violence.

Make everyone weep tears of repentance and of new life, which will open their hearts to the regenerating gift of God’s love. Make them weep tears of joy for having seen the profound tenderness of your heart. Praised be Jesus Christ!