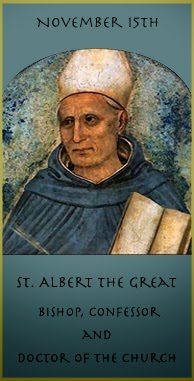 St. Thomas Aquinas is widely known and hailed as one of the most brilliant theologians of the Church, writing the Summa Theologica, a work that sought to encompass the whole of Theology (the Study of God).

Do you ever wonder who taught St. Thomas?

Who formed him and helped him to achieve such wisdom and knowledge?

We don’t hear about him nearly as much as we should, but it is the saint we celebrate today — his  teacher was St. Albert the Great!  St. Albert, even to his contemporaries was known as the GREAT because of his brilliance!

He was a brilliant theologian and scientist.  He sought to compile all the knowledge of the time, including astronomy, mathematics, economics, logic, rhetoric, ethics, politics, metaphysics and all branches of natural science into one great body of work which took him over 20 years to complete.

The media often portrays the Church as an enemy of science.  But that couldn’t be farther from the truth.  It was men of the Church, intellectual worshippers God, who marveled at God’s creation and sought to study its beauty and magnificence!  He saw no discrepancy between the study of science and the study of God.

“In this, we should follow the example of St. Albert the Great, who saw in everything that he studied the God who made it and to whom it is ultimately ordered. Surely, as Pope Leo XIII remarked, “Truth cannot contradict truth”; hence, let us join the “teacher of everything” by allowing everything we study to lead us to the contemplation of God, the Supreme Truth.”

For all his intellectual greatness, it was his heart for God that made him one of the greatest of saints.  So great, in fact, that the Church has named him as one of only 35 Doctors of the Church.  Being named a Doctor of the Church is a recognition of the saint’s teaching was so extraordinary that it was meant for “any age of the Church.”


Albert was born around the year 1200.  He pursued his studies at the University of Padua and entered the Dominicans in 1223.  He taught in many universities and was eventually sent to the University of Paris, to earn his doctorate in 1245 with Thomas Aquinas. In 1248, they both returned to Cologne to House of Studies for the Dominican order, where Albert was named Regent and Thomas was named second professor and Master of Students. In 1254, Albert was elected Provincial of the Dominican Order in Germany. In 1256, he traveled to Rome to defend the Order against attacks and while there was named the Pope’s theologian and preached on the Gospel of St. John and the Epistles.  He resigned as Provincial in 1257 in order to devote himself to study and teaching.  During his long life, he continued to teach, would become Bishop, help form the direction of studies for the Dominicans, sent letters to aid St. Thomas in his fight against heretics, and took an active part in the Council of Lyon with Pope Gregory X (1274).  It was on the way to the Council that he heard that St. Thomas had died. It:

was a heavy blow to Albert, and he declared that “The Light of the Church” had been extinguished. It was but natural that he should have grown to love his distinguished, saintly pupil, and it is said that ever afterwards he could not restrain his tears whenever the name of St. Thomas was mentioned. Something of his old vigour and spirit returned in 1277 when it was announced that Stephen Tempier and others wished to condemn the writings of St. Thomas, on the plea that they were too favourable to the unbelieving philosophers, and he journeyed to Paris to defend the memory of his disciple. Some time after 1278 (in which year he drew up his testament) he suffered a lapse of memory; his strong mind gradually became clouded; his body, weakened by vigils, austerities, and manifold labours, sank under the weight of years. He was beatified by Pope Gregory XV in 1622; his feast is celebrated on the 15th of November. The Bishops of Germany, assembled at Fulda in September, 1872, sent to the Holy See a petition for his canonization; he was finally canonized in 1931. 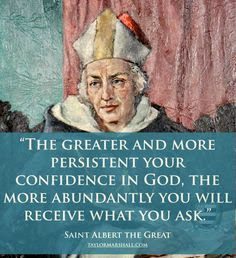 From the Breviary today, we have the great treasure of actually reading his own words and being blessed by his teaching:
From a commentary of the gospel of Luke by Saint Albert the Great, bishop
(22,19; Opera omnia, Parisiis 1890-1899,23,672-674)

Do this in remembrance of me. Two things should be noted here. The first is the command that we should use this sacrament, which is indicated when he says: Do this. The second is that this sacrament commemorates the Lord’s going to death for our sake.Do this. Certainly he would demand nothing more profitable, nothing more pleasant, nothing more beneficial, nothing more desirable, nothing more similar to eternal life. We will look at each of these qualities separately.This sacrament is profitable because it grants remission of sins; it is most useful because it bestows the fullness of grace on us in this life. The Father of spirits instructs us in what is useful for our sanctification. And his sanctification is in Christ’s sacrifice, that is, when he offers himself in this sacrament to the Father for our redemption, to us for our use. I consecrate myself for their sakes. Christ, who through the Holy Spirit offered himself up without blemish to God, will cleanse our consciences from dead works to worship the living God.Nor can we do anything more pleasant. For what is better than God manifesting his whole sweetness to us. You gave them bread from heaven, not the fruit of human labor, but a bread endowed with all delight and pleasant to every sense of taste. For this substance of yours revealed your kindness toward your children, and serving the desire of each recipient, it changed to suit each one’s taste.He could not have commanded anything more beneficial, for this sacrament is the fruit of the tree of life. Anyone who receives this sacrament with the devotion of sincere faith will never taste death. It is a tree of life for those who grasp it, and blessed is he who holds it fast. The man who feeds on me shall live on account of me.Nor could he have commanded anything more lovable, for this sacrament produces love and union. It is characteristic of the greatest love to give itself as food. Had not the men of my tent exclaimed: Who will feed us with his flesh to satisfy our hunger? as if to say: I have loved them and they have loved me so much that I desire to be within them, and they wish to receive me so that they may become my members. There is no more intimate or more natural means for them to be united to me, and I to them.Nor could he have commanded anything which is more like eternal life. Eternal life flows from this sacrament because God with all sweetness pours himself out upon the blessed. 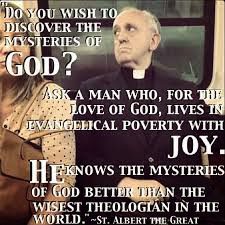 When putting this post together, I ran across the amazing quote and early picture of our Holy Father, Pope Francis, as a priest who rode the bus each day to get to work.
What a wonderful summary of St. Albert the Great!
What truth and humility!
One of the greatest minds of all time proclaims that it is the lover of God, who lives the Gospel in joy who can truly comes to know the mysteries of God!
May this give us all hope and great joy!  It is not so much in our intellect, but in our love for God, that we become truly wise and come to know His Mysteries!
St. Albert the Great, pray for us!


There is so much to read about St. Albert the Great, I couldn’t hope to give a adequate summary of his greatness.  These facts and more can be found at New Advent.
Copyright 2014 Janet Moore