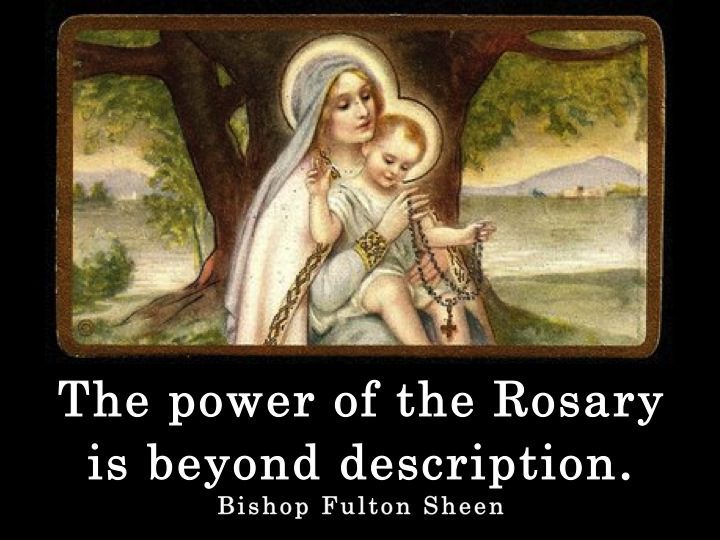 Consider these strong words by Pope St. John Paul II, who in 1980, held up his Rosary in an interview and said:

“Here is the remedy against evil. Pray, pray and ask for nothing else. Put
everything in the hands of the Mother of God. We must be prepared to undergo
great trials in the not too distant future. Trials that will require us to be
ready to give up even our lives and a total gift of self to Christ and for
Christ. Through your prayers and mine, it is possible to alleviate this
tribulation, but it is no longer possible to avert it. It is only in this way
the Church can be renewed. How many times, indeed, has the renewal of the
Church been effected in blood. This time it will not be otherwise. We must be
attentive to the prayer of the ROSARY.”

Additionally, Sister Lucia, one of the visionaries of Fatima once said:

“The Most Holy Virgin in these last times in which we
live has given a new efficacy to the recitation of the Rosary to such an extent
that there is no problem, no matter how difficult, whether temporal or above
all spiritual, in the personal life of each one of us, or of our families, that
cannot be solved by the Rosary.”

“In our time more than ever before, the chief strength of the
wicked, lies in the cowardice and weakness of good men. All the strength of
Satan’s reign is due to the easy-going weakness of Catholics.”

Lastly, let us remember the beautiful promises Mary made for us who pray the Rosary:

The Fifteen Promises of the Virgin Mary to those who recite the Rosary
1. Whoever shall faithfully serve me by the recitation of the Rosary, shall receive signal graces.
2. I promise my special protection and the greatest graces to all those who shall recite the Rosary.
3. The Rosary shall be a powerful armor against hell, it will destroy vice, decrease sin, and defeat heresies.
4. It will cause virtue and good works to flourish; it will obtain for souls the abundant mercy of God; it will withdraw the hearts of people from the love of the world and its vanities, and will lift them to the desire of eternal things. Oh, that souls would sanctify themselves by this means.
5. The soul which recommends itself to me by the recitation of the Rosary, shall not perish.
6. Whoever shall recite the Rosary devoutly, applying himself to the consideration of its Sacred Mysteries shall never be conquered by misfortune. God will not chastise him in His justice, he shall not perish by an unprovided death; if he be just, he shall remain in the grace of God, and become worthy of eternal life.
7. Whoever shall have a true devotion for the Rosary shall not die without the Sacraments of the Church.
8. Those who are faithful to recite the Rosary shall have during their life and at their death the light of God and the plentitude of His graces; at the moment of death they shall participate in the merits of the Saints in Paradise.
9. I shall deliver from purgatory those who have been devoted to the Rosary.
10. The faithful children of the Rosary shall merit a high degree of glory in Heaven.
11. You shall obtain all you ask of me by the recitation of the Rosary.
12. All those who propagate the Holy Rosary shall be aided by me in their necessities.
13. I have obtained from my Divine Son that all the advocates of the Rosary shall have for intercessors the entire celestial court during their life and at the hour of death.
14. All who recite the Rosary are my children, and brothers and sisters of my only Son, Jesus Christ.

15. Devotion of my Rosary is a great sign of predestination.


May we not be weak and cowardly as Pope St. Pius X warned, but may millions stand up against the evil Satan is perpetrating in our world.
Joining together in the battle by making the decision to pray the Rosary daily as Our Mother requested at Fatima repeatedly:

And again on Oct 13, 1917
“I am the Lady of the Rosary,
I have come to
warn the faithful to amend their lives and ask for pardon for their sins. They
must not offend Our Lord any more, for He is already too grievously offended by
the sins of men.
People must say the Rosary. Let them continue saying it
everyday.”

What more will it take for all Catholics to do as Our Blessed Mother requests?
What more needs to happen in our world to incite us to pray?

May we realize and respond to the inestimable gift of Mary coming down from heaven to speak to us and to save us (!) by heeding her words and her warnings.
For more articles on the Rosary click here and here.
For Pope St. John Paul II’s exhortation on the Rosary, click here: https://www.ewtn.com/library/PAPALDOC/JP2ROSAR.HTM
Photo Credit: Created by Author.
© 2015 Janet Moore. All Rights Reserved.