Skip to content
I have to share this story.  It is deeply touching, heartbreaking, encouraging, challenging…and a sign of God’s intimate Presence and Love still alive and at work among us in the most tragic of circumstances…  This story is about a woman who is touching the lives of many children in circumstances most of us could never imagine.  But, it is also the story of Christianity in Egypt… whose Churches have been bombed and whose children are being martyred.  I would like to wet your appetite to read this very worthy article, by including the remarkable circumstance it relates:

“But something remarkable happened in the smouldering ashes of Egypt’s burned churches. In one town after another, banners were raised over the ruined buildings. Charred walls were scrawled with messages for the attackers.

The messages? “We forgive!” “We still love you!” And on the burned wall of the ruined orphanage: “You meant to hurt us, but we forgive you. God is love. Everything works out for the good.”“

God bless you this Holy Saturday and always! 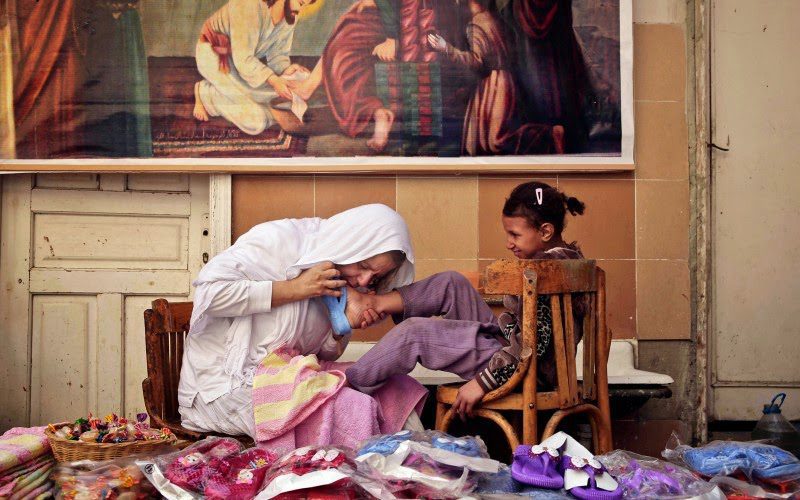 by Ellen Vaughn posted Thursday, 2 Apr 2015
Amid the filth and despair of Cairo’s worst slums, a middle-class ‘lady in white’ feels called by God to protect the children who must sort rubbish to stay alive
It’s a place that feels as though it’s beyond hope. It has existed on the fringes of Cairo for generations, a maze of crumbling, dark dwellings and narrow streets of packed dirt, trodden by emaciated donkeys pulling wooden carts towering with stacks of rubbish.
This is the place where the “garbage-pickers” live. Fifty thousand of them. They pick up and sort greater Cairo’s waste – the rubbish of 22 million people – and recycle what they can for a few coins a day. They separate rotting food, used nappies, hypodermic needles, broken glass, plastic, metal and crumpled paper. They live in sewage, disease and stench. There is little clean water. Among many families, violence, addiction and abuse are a way of life. Electricity is scarce and the nights are full of dangers. Many of the children born here will die before they are five years old. Some starve; some succumb to dysentery. The residents of this place are known in Arabic as the Zabaleen: garbage people.
A little boy named Anthony came with his family to this place when he was three years old. He was too young to know that, as a Christian in a country where everyone’s religion is listed on their identity card, he was part of a religious minority. He was too young to understand that his parents had fled from their village in southern Egypt when radical Islamists had burned down their home. He didn’t know that the teeming garbage village of Mokattam was one of the few places his parents could find work.