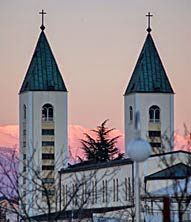 Never heard of
Medjugorje nor have any idea what it is?

Medjugorje is a
small village in the former country of Yugoslavia (now Bosnia-Herzegovina)
where, since June 24, 1981, the Virgin Mary has reportedly been appearing everyday! 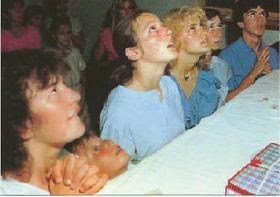 Six alleged
visionaries tell us that Our Blessed Mother comes as the Queen of Peace to
remind us that God exists and to “call us to conversion for the last time”.
This conversion consists of living lives
of Eucharist, confession, peace, heartfelt prayer and fasting.  Such an
outpouring of graces have flowed from the messages of Medjugorje that hundreds
of priestly and religious vocations, tremendous miracles of healing of the body
and the spirit, and thousands of conversions have been reported.

Some who have heard of Medjugorje, mistakenly think that the Church has
condemned the reported occurrences that are happening there, however, it has
not. The last official word from the Church, stated:

“We bishops,
after a three-year-long commission study accept Medjugorje as a holy place, as
a shrine…”  His Eminence Cardinal Dr. Franjo KUHARIĆ, Archbishop of Zagreb (Glas Koncila, August 15, 1993)


The latest commission, ordered by the Vatican, investigated Medjugorje rendered its findings to the Congregation for the Doctrine of the Faith on January 19, 2014. It is up to Pope Francis to decide when he will make the findings public. Interestingly, before becoming Pope Francis, Cardinal Jorge
Bergoglio welcomed the Medjugorje visionary Ivan, as well as the former pastor
of Medjugorje, Father Jozo Zovko to speak in his diocese. (Father Jozo had been
imprisoned and tortured by the local Communist government soon after the
apparitions began for protecting the six children who claimed to see Our
Blessed Mother).

For millions, there are persuasive reasons for believing the
visionaries’ accounts:
Never before have such extensive scientific tests been done
on alleged seers.  These tests
included blasting ninety decibels (equivalent to a loud explosion) into the
ears of the alleged visionaries during an apparition –to which, the
visionaries showed no response, When touched with an algometer, an instrument
that causes a skin burn to register response to pain, again, the visionaries
had no reaction. 1000 watt light bulbs where placed before the seers’ eyes, and
no blinking occurred – the pupils dilated, but the brain waves showed no change.  Like the other results reported, this is
scientifically inexplicable. The tests also showed the seers’ eyes simultaneously
looked at precisely the same spot, (as well as knelt down) within one-fifth of
a second of each other, and gazed simultaneous
upwards at the end of the vision.  Two of
the visionaries had no eye movements or blinking whatsoever during the apparition
(lasting anywhere from 3-45 minutes). All visionaries’ voices became inaudible
during the alleged apparitions– although the movements and muscles associated
with speech remained functioning.

It
is estimated that around 50 million people have visited Medjugorje.

The large Church has long been too small to
hold the crowds, so a large outdoor altar and amphitheatre has been built to accommodate
up to 50,000 pilgrims at a time, who flock to experience the spiritual atmosphere
of Medjugorje, where there are often tens if not hundreds of visiting priests
concelebrating Mass and hearing confessions.
One of the most
beautiful aspects of Medjugorje is the intense prayer life of the
villagers.  The village gathers to pray for at least 2 -3 hours every
evening.


Their daily prayers consist of:
The Joyful and
Sorrowful Mysteries of the rosary, the reported apparition of Our Blessed Mother, Holy
Mass, followed by the peace chaplet, prayers for the sick, the blessing of
objects and the Glorious Mysteries of the rosary. Additionally,
Eucharistic holy hours are added three times a week, the Stations of the Cross
are prayed while climbing up the nearby Mount Krizevac each Friday, and the
rosary is prayed while climbing Apparition Hill on Sundays.

There are currently
fifty-nine confessionals in the small village, often in use all day long and
into the early morning hours, causing many, including John Paul II to name
Medjugorje the “confessional of the world”. In a private letter, it
is said that he stated that if he had not been pope, he would have wanted to
live in Medjugorje to have the opportunity to celebrate the Sacrament of
Reconciliation with the millions of pilgrims who travel there.

The fruits of
living the Messages given by Our Mother are remarkable!

Some of these include:
the healing of centuries old animosities between villagers, the steadfast faith
of both villagers and visionaries against the communist oppression, which marked
the first 15 years of the apparitions. The communist oppression included arrests, imprisonment, loss
of jobs and torture for many villagers, including Father Jozo, the parish pastor at the time the reported apparitions first began. Another sign that many point to is the fact that the village stood unharmed as an oasis
of peace in the midst of one the most vicious and horrific wars of our time. 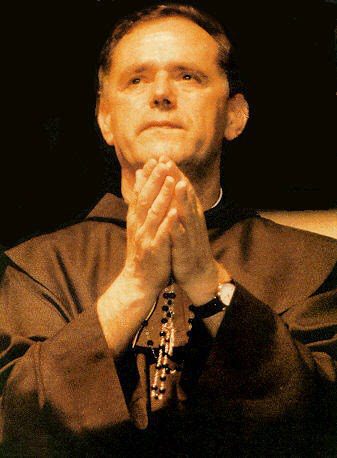 The Church tells
us that we are never bound to believe in any private revelation — that the
fullness of our Faith is revealed to us in Christ, in Scripture, and in the
Public Revelation passed down to us by the apostles. Yet, neither does the
Church forbid the faithful from believing in private revelation that is not
contrary to our Faith or morals. Often times apparitions have occurred at
particular moments of history to reinforce a revealed Truth that is not clearly
understood, that is no longer being practiced or in times of grave necessity. Think
of the 1994 Rwandan genocide which was preceded by years of calls for
repentance, prayer, reconciliation and conversion by Our Blessed Mother
beginning in 1981. The apparitions were officially approved in 2001 — officially
recognizing the faithful’s belief in the apparitions that had been in place in
for years.

With this
understanding in mind, if the Most Holy and Blessed Trinity has continued to
send Our Blessed Mother to the earth pleading with us to pray with the heart
and to convert our lives every day for over 33 years — is it not
something that we should ponder, pray about, and take very seriously?


Contrary to many reports circulating recently, there is no ban on believing in Medjugorje.  Nor is it a concern that the last report of the 1991 Bishop’s Conference in Zadar (mentioned in the Apostolic Nuncio’s directive) stated:

“On the basis of investigations so far it can not be affirmed that one is dealing with supernatural apparitions and revelations.”


This is not a condemnation.

Interestingly, the Church rarely states that apparitions are of supernatural origin. Very rarely has the Church ever done so.  Instead, most typically, the Church simply states, as in the case of Lourdes and Fatima, that they are worthy of belief.