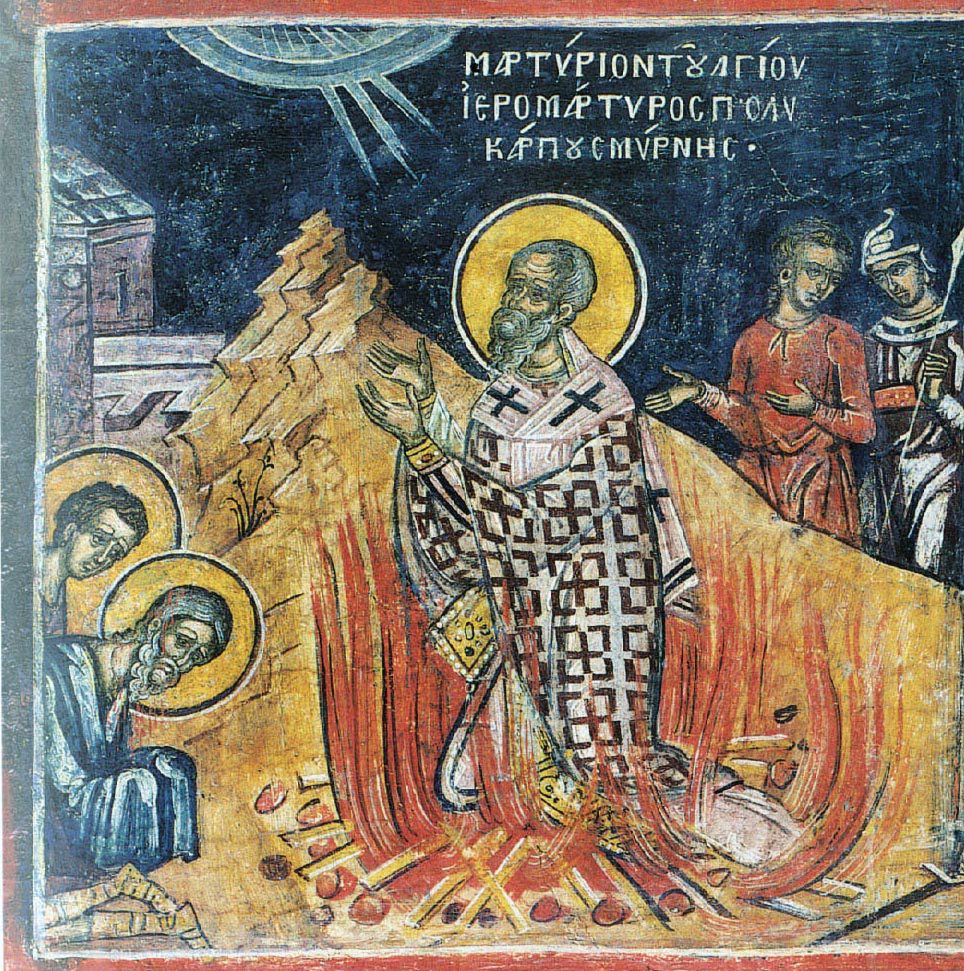 First of all, what
a name! Polycarp can literally be translated as “many fish”
(as poly means “many” and carp means “fish”). Perhaps Polycarp obtained this name
because of his great desire to be a “fisher of men” in order to save
many souls.
On this feast of
St. Polycarp, I wanted to share with you a little about this amazing man and
how I came to know and love St. Polycarp through my study of St. John the
Apostle.

(I wrote
my Master’s thesis in defense of St. John as the Beloved Disciple. I wrote this
defense in response to the modern historical critics who have tried not only to
discredit St. John’s designation as Jesus’ Beloved Disciple and so
subsequently, all history pertaining to the same — which, if their faulty
reasoning and scholarship is accepted, effectively erases St. John’s place in the
history of the early Church, and ultimately casts doubt on the authenticity and
authority of his Gospel, Epistles and the Book of Revelation.)
In my study, I
found a treasure in the early Church Fathers, one of whom was St. Polycarp. I
came to cherish these men who fell so in love with Christ that they devoted
their entire lives to Him.  Although never knowing Christ personally, they
came to know and love Jesus through the eyewitness testimonies of the apostles.
In doing my research,
I came across accounts and writings of St. Polycarp who was taught by St. John
the Apostle, the Evangelist and Beloved Disciple himself.
St. Irenaeus wrote
about being a disciple of Polycarp, sharing that as a boy he
would listen at his feet, as he:
gave of his intercourse with John and with the others who had seen the Lord.
And as he remembered their words, and what he heard from them concerning the
Lord, and concerning his miracles and his teaching, having received them from
eyewitnesses of the ‘Word of life,’ (1 John 1:1) Polycarp
related all things in harmony with the Scriptures.
These things being
told me by the mercy of God, I listened to them attentively, noting them down, not on
paper, but in my heart. And continually, through God’s grace,
I recall them faithfully. (E.H.5.20.6 emphasis
mine)
Several decades
into the second century, what an extraordinary grace for believers in Christ,
to be able to sit and listen at the feet of someone who was taught by and knew
the apostles! If you were to read the whole letter written above by St.
Irenaeus, you would hear him speak of the honor it was to be able to listen at
the feet of a disciple of “John and others who had seen the Lord”. So much so,
that he was surrounded by people who “attentively listened” and carefully kept
his teachings in their hearts.
St. Irenaeus
further writes of Polycarp:
But Polycarp
also was not only instructed by apostles,
and conversed with many who had seen Christ, but was also, by apostles
in Asia, appointed bishop of the Church
in Smyrna,
whom I also saw in my early youth, for he tarried [on earth] a very long time,
and, when a very old man, gloriously and most nobly suffering martyrdom,
departed this life, having always taught the things which he had learned from
the apostles, and which the Church
has handed down, and which alone are true.
(A.H. 3.3.4)
We are blessed to
have an eyewitness account of this martyrdom, which was truly amazing! The
account is worth reading in its entirety.  But, because of its length,
I’ll share some highlights:
Now, as Polycarp
was entering into the stadium, there came to him a voice from heaven, saying,
“Be
strong, and show yourself a man, O Polycarp!”
No one saw who it
was that spoke to him; but those of our brethren who were present heard the
voice.
… [the proconsul]
sought to persuade him to deny [Christ], saying, “Have respect to your old age…
“Swear, and I will set you at liberty, reproach Christ.”
Polycarp declared,

“Eighty
and six years have I served Him, and He never did me any injury: how then can I
blaspheme my King and my Saviour?”
…Polycarp said,
“You
threaten me with fire which burns for an hour, and after a little is
extinguished, but are ignorant of the fire of the coming judgment and of
eternal punishment, reserved for the ungodly. But why do you tarry? Bring forth
what you will.”
While he spoke
these and many other like things, he was filled with confidence and joy, and
his countenance was full of grace …when they were about also to fix him with nails [to consume him in the
fire], he said,
“Leave me
as I am; for He that gives me strength to endure the fire, will also enable me,
without your securing me by nails, to remain without moving in the pile.”
They did not nail
him then, but simply bound him. And he, placing his hands behind him, and being
bound like a distinguished ram [taken] out of a great flock for sacrifice, and
prepared to be an acceptable burnt-offering unto God, looked up to heaven, and
said,
“O Lord
God Almighty, the Father of your beloved and blessed Son Jesus Christ, by whom
we have received the knowledge of You, the God of angels and powers, and of
every creature, and of the whole race of the righteous who live before you, I
give You thanks that You have counted me, worthy of this day and this hour,
that I should have a part in the number of Your martyrs, in the cup of your
Christ, to the resurrection of eternal life, both of soul and body, through the
incorruption [imparted] by the Holy Ghost. Among whom may I be accepted this
day before You as a fat and acceptable sacrifice, according as You, the
ever-truthful God, have foreordained, have revealed beforehand to me, and now
have fulfilled. Wherefore also I praise You for all things, I bless You, I
glorify You, along with the everlasting and heavenly Jesus Christ, Your beloved
Son, with whom, to You, and the Holy Ghost, be glory both now and to all coming
ages. Amen.” 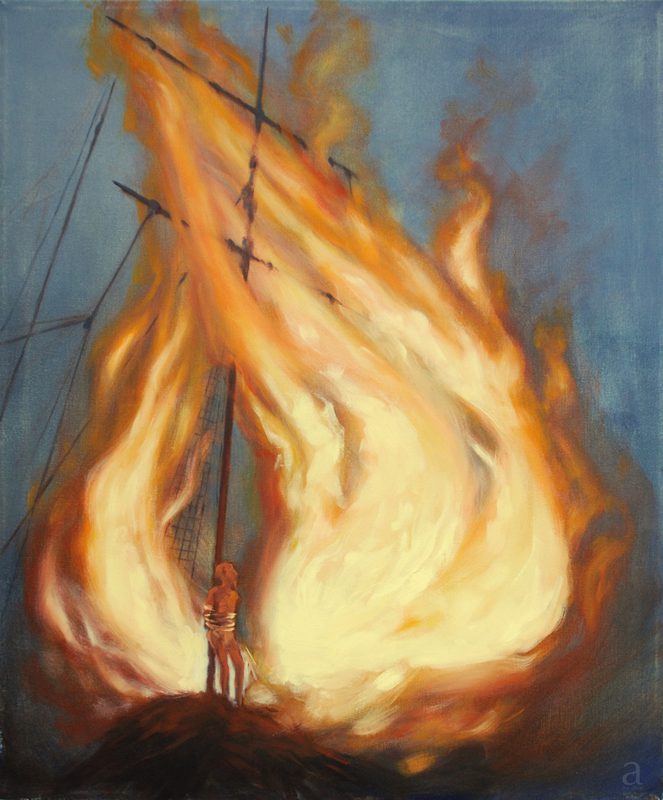 When he had
pronounced this amen, and so finished his prayer, those who were appointed for
the purpose kindled the fire. And as the flame blazed forth in great fury, we,
to whom it was given to witness it, beheld a great miracle, and have been
preserved that we might report to others what then took place. For the fire,
shaping itself into the form of an arch, like the sail of a ship when filled
with the wind, encompassed as by a circle the body of the martyr. And he
appeared within not like flesh which is burnt, but as bread that is baked, or
as gold and silver glowing in a furnace. Moreover, we perceived such a sweet
odour [coming from the pile], as if frankincense or some such precious spices
had been smoking there.
At length, when
those wicked men perceived that his body could not be consumed by the fire,
they commanded an executioner to go near and pierce him through with a dagger.
And on his doing this, there came forth a dove, and a great quantity of blood,
so that the fire was extinguished; and all the people wondered that there
should be such a difference between the unbelievers and the elect, of whom this
most admirable Polycarp was one, having in our own times been an apostolic and
prophetic teacher, and bishop of the Catholic Church which is in Smyrna. For
every word that went out of his mouth either has been or shall yet be
accomplished.
O God of wonders,
you never cease to astound me!  Help me to witness to you in this age in
which so many of your children no longer believe in you. In this time of
widespread deception, may the Truth that St. Polycarp’s preached, his love of
God and his witness unto death encourage and inspire me, so that I may have
the courage to live and die for You as well, realizing: “What have we to fear if God is on our
side?”
St. Polycarp, pray
for us!  Help us to have ever-greater courage and love for Christ. Help us
to stand up to the errors and deceptions of our day, so that we, like you, may be willing
to give up everything in order to bring Jesus to the world and to help all enter into the heavenly glory that God longs to share with all His Children.  Amen.