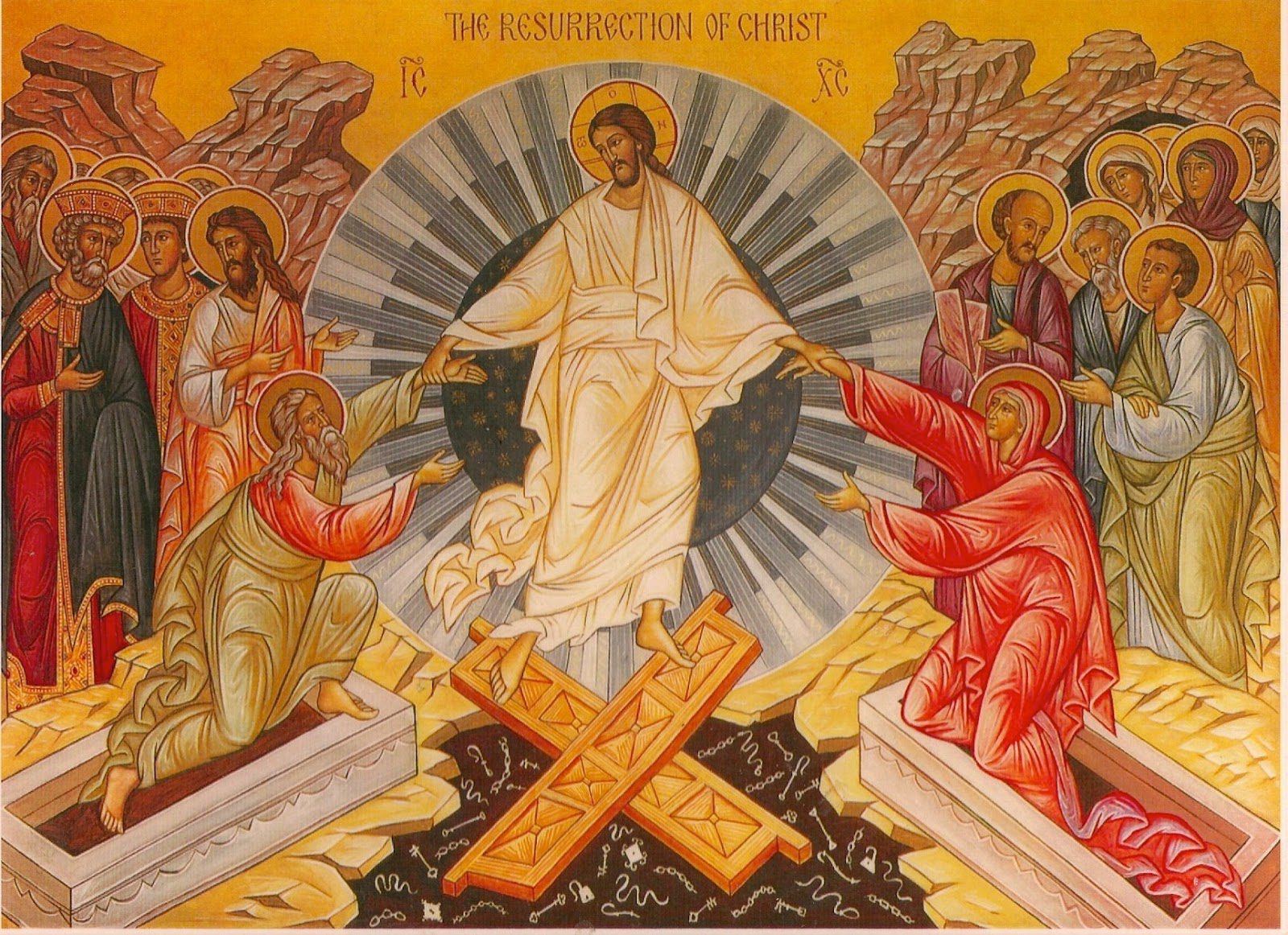 Scripture tells us that darkness fell upon the earth from noon to midafternoon while Jesus hung on the Cross, and then, at the moment Jesus died the 8 foot thick curtain that enclosed the Holy of Holies in the Jerusalem temple was rent in two, the earth quaked, and the dead were raised…

“Jesus cried out in a loud voice and then gave up his spirit. Suddenly the curtain of sanctuary was torn in two from top to bottom. The earth quaked, boulders split, tombs opened. Many bodies of saints who had fallen asleep were raised. After Jesus’ resurrection they came forth from their tombs and entered the holy city and appeared to many.”  Matthew 27: 50-53

Imagine!!!
And imagine how wondrous the work Jesus was accomplishing on Holy Saturday.

While those on earth (all, except Mary) wept in deep and bitter sorrow, believing all was lost…
Jesus was harrowing “hell”.
He was bringing eternal glory to all the righteous who had lived before Him,
who, up until the Triumph of the Cross, were unable to enter heaven because of the sin of Adam and Eve.
All were now freed!
What a glorious reality to contemplate!

For sin and death have truly be vanquished in and through the Cross of Christ!

…the message of the cross is foolishness to those who are perishing, but to us who are being saved it is the power of God. For it is written:

“I will destroy the wisdom of the wise,
And bring to nothing the understanding of the prudent.”
…we preach Christ crucified, to the Jews a stumbling block and to the Greeks foolishness, but to those who are called, both Jews and Greeks, Christ the power of God and the wisdom of God. Because the foolishness of God is wiser than men, and the weakness of God is stronger than men. 1 Corinthians 1: 18-19, 23-25

Imagine the tombs splitting open and the bodies of the saints who had died before Christ being raised by Him… some even appearing to many in Jerusalem!
What did they say?
If they spoke, they must have proclaimed the power and the wisdom of Christ
poured out in unending love from the Cross!

It is sometimes hard to fathom the glory of the Cross if we look only at the excruciating suffering Jesus endured. But Scripture says:
For the sake of the joy that lay before him Jesus
endured the cross, despising its shame, and has taken his seat at the
right of the throne of God. (Hebrews 12:2).
Saying also, when it came time for him to enter into His Hour: “Now is the Son of Man glorified, and God is glorified in him.” (John 13: 31).

Recognizing the glory of the Jesus’ Cross, helps us imagine the glory of our own Crosses as well. Many saints assure us that our Crosses are truly the most precious gifts we have on earth. Echoing St. Paul:

We are not discouraged, then, when our hearts are set on heaven and the place prepared for us, which: “Eye has not seen,
nor ear heard, nor has entered into the heart of man the things which
God has prepared for those who love him.” 1 Corinthians 2:9

As we await the Resurrection, then, let us pray for the grace to embrace our own crosses, realizing their infinite worth and goodness when united to the Cross of Christ.

Each Holy Saturday, the Church offers this homily (in the Breviary’s Office of Readings) to help us enter into the reality of what the Cross of Christ accomplished.
It has been such a gift to me that I long to read it each year.
May it be a gift to you as well:

He has gone to search for our first parent, as for a lost sheep.
Greatly desiring to visit those who live in darkness and in the shadow
of death, he has gone to free from sorrow the captives Adam and Eve, he
who is both God and the son of Eve. The Lord approached them bearing the
cross, the weapon that had won him the victory. At the sight of him
Adam, the first man he had created, struck his breast in terror and
cried out to everyone: “My Lord be with you all.” Christ answered him:
“And with your spirit.” He took him by the hand and raised him up,
saying: “Awake, O sleeper, and rise from the dead, and Christ will give
you light.”

I am your God, who for your sake have become your son. Out of love
for you and for your descendants I now by my own authority command all
who are held in bondage to come forth, all who are in darkness to be
enlightened, all who are sleeping to arise. I order you, O sleeper, to
awake. I did not create you to be held a prisoner in hell. Rise from the
dead, for I am the life of the dead. Rise up, work of my hands, you who
were created in my image. Rise, let us leave this place, for you are in
me and I am in you; together we form only one person and we cannot be
separated.

For your sake I, your God, became your son; I, the Lord, took the
form of a slave; I, whose home is above the heavens, descended to the
earth and beneath the earth. For your sake, for the sake of man, I
became like a man without help, free among the dead. For the sake of
you, who left a garden, I was betrayed to the Jews in a garden, and I
was crucified in a garden.

See on my face the spittle I received in order to restore to you the
life I once breathed into you. See there the marks of the blows I
received in order to refashion your warped nature in my image. On my
back see the marks of the scourging I endured to remove the burden of
sin that weighs upon your back. See my hands, nailed firmly to a tree,
for you who once wickedly stretched out your hand to a tree.

I slept on the cross and a sword pierced my side for you who slept in
paradise and brought forth Eve from your side. My side has healed the
pain in yours. My sleep will rouse you from your sleep in hell. The
sword that pierced me has sheathed the sword that was turned against
you.

Rise, let us leave this place. The enemy led you out of the earthly
paradise. I will not restore you to that paradise, but I will enthrone
you in heaven. I forbade you the tree that was only a symbol of life,
but see, I who am life itself am now one with you. I appointed cherubim
to guard you as slaves are guarded, but now I make them worship you as
God. The throne formed by cherubim awaits you, its bearers swift and
eager. The bridal chamber is adorned, the banquet is ready, the eternal
dwelling places are prepared, the treasure houses of all good things lie
open. The kingdom of heaven has been prepared for you from all
eternity.